By this point in the term you’re up to your necks in briefs.
(for the benefit of any non-ad-agency folks who’ve ducked into this website, a “brief” in this context isn’t underwear, but a one-page summation of what an advertiser is hoping the ad campaign his agency creates will accomplish)
There’s plenty that can be said about the value and the lack of value contained in the average ad agency brief.
I don’t aim here to get into that.
My focus is more narrow.

I’m concerned that you may make the mistake of thinking that work which “answers the client’s problem” as written in the brief is work that has done the job of advertising and is therefore good work.
Negatory on that, rubber duck.
Answering the client’s problem is only part of the job a good ad does, and not at all the most important part (more about that later). 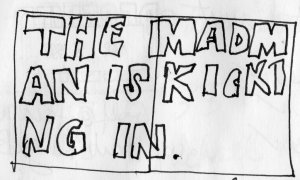 Good advertising forms a connection between speaker and audience, between advertiser and people, that human beings enter into willingly, even hopefully at times.
Merely broadcasting the aim of your client into the eardrums and eye sockets of your brothers and sisters is neither the aim of good advertising nor an effective way to positively influence sales of the client’s product.
Half a connection isn’t a connection.

Here’s where you need to summon Mister Wacko.

What catches your eye when you walk around?
To what are you drawn on television/in grocery stores/art galleries/music?
Me, I want something I don’t already know.
My eyes want to feast on a sight they’ve never seen before.
Ears too. And smell and touch and taste.
They all want in on the new.
You’re the same, and so are all the people on earth.

If all you care about is the client, that’s who will listen.
Care about the audience sitting out there more than the client and you’ll have a chance at connecting with that audience.
Don’t, and you’re a shill, that’s all.

Answer the client’s need only and you’ll have something nobody wants to listen to except the client–and even he will only do it because he feels he has to.

Answer the audience’s need only and you’ve got something people will at least watch/read/listen to.
–But if the client’s logo at the end doesn’t form a palpable connection or bring to the audience anything they care about or didn’t already know you’ll have interrupted their life under the promise of having something to say, but not come through. Audiences tire of that. However, your work at least won’t leave the audience with the sense they’re impotent sheep who can be ordered about at the whim of big advertisers, as most advertising does.

Answer the client’s need as well as the audience’s and you’ve got a chance at great work.
It takes magic, ludicrousy, fancy, blind-flying & something hidden from probably 99.7% of the people on earth to bring an audience what they don’t know.
It takes Mr. Wacko.
A willingness to love what it makes no sense to. A penchant, sometimes, for turning an exact circle away from what everybody arounds you says is true and going in the opposite direction.
These are crucial willingnesses, not something you can allow yourself to be afraid of or talked out of by the normal people around you.
Of course, in addition to letting Mr. Wacko in, you’ve got to not lose the simple, common sense of what everybody does know & feel & trust in as they walk around.
Takes both.
It’s hard to make a connection between people wanting different things and to make that connection under the pressure of a deadline, why are we surprised it should take a madman?

How do you do it?
I come back to this admonition so often you must be tired of hearing it. It’s true anyway.
Do your work in a book
Carry it where you go.
Keep in it not only what you make but fill it with samples of what weirdnesses reach out to you.
Get used to letting what calls to you inform & lead & infect what you do.
Isn’t there enough normal in the world already?