I address those of you from 2nd year, a week after graduation.
Those of you in 1st year are welcome to listen if you can stand it.

I wish to speak about the careers you’re itching to hurtle yourselves into.
I mean to take some of the piss out of your vinegar.

Although 99% of you won’t be able to learn a thing from the telling of my experience, it’s possible half a line may find lodging in a brain or two.
Greater than I have taken up poorer odds.

.
Yes, that’s the message. (most of you can tune out here)
Sure there’s

in advertising.
And I know that after committing a bundle of moolah to a VCU AdCenter education you’d like nothing more than a fat envelope of green to appear under your pillow tomorrow morning.

Pretend it doesn’t exist.
Go about starting your career as if there isn’t a paycheck every other week.
Make your new job choices without asking about salary.

Don’t worry.
That you have what it takes to get through AdCenter may not yet assure you it’s time to pack for the trip to NY to be inducted into the Art Directors’ Hall of Fame, but surely it cannot be difficult to believe you have come into possession of the mere competency required to pay back your loans.

Always remember this: forget the

Go get a job in advertising because somewhere along the line the tango of words & images dancing together called you.
Get into this business because great advertising can lift up the weak and destroy evil.

It’s hard work making ads.
I don’t know what drives people who do it because there’s 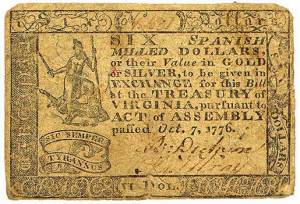 in it.
I do it because nothing else feels as much like fun when you’ve done your work well.

for the things you need.
But, not as much if you chase it as there is when you chase ideas.

.
Pay no attention to it.
Go after what your inside wants–the work.
Love the making.
Screw the mammon.
You can’t eat it.
However.
You can live on work. You’ll see.

“Screw Fenske. He’s an idealist.”
I can hear you think it.
You’re right.
I’m out of bounds idealistic here.
You have to be.
Don’t do this if you aren’t.

p.s. i’ve read the only money in Lincoln’s pocket when he was assassinated was a worthless $5 confederate bill (issued in Richmond) like the one above

Both my experience as myself and my observation of others as themselves has taught me Blake’s line is true.

Distaste leads to embarassment at finding oneself engaged in an act for which one has acquired distaste.

Embarassment leads to change. And change in a hurry. In the direction opposite from distaste.

——eg; overdrinking. you wake up in the morning after a night of excess and bang, distaste. you hate what you’ve done, and then, bang again, embarrassment sets in, and you vow in that minute to never drink again.————

Knowledge is good. But it is merely a first step.
Wisdom is when we take knowledge and apply it to life.
What Blake points to here, in my sense of it, is that what moves the human being to the wise act is the embarrassment at having walked the road of excess.

I bring this up why?
As students what you are at school for is change.
I know you think it’s to learn something but that’s wrong.
Or, not exactly right.
If you were there to become a brain surgeon, then, yes, you’d be there to learn.
The causes of brain injury. The steps involved in reparative surgery, etc.
But you’re there to advance in your abilities as practitioners of an art form.
Or, at least, a form of communication that happens inside and for which there exists no definitive number of steps from beginning to end that when followed turns you out as “a copywriter”.

You have a week of school left.
Probably half of your book is done.
You’ve got almost enough done to skate through portfolio review, but not more.
You feel the need for the other half of your book to be better than the half you’ve got.
At the same time you feel you’re done with school.
What you have is a conundrum.
I know the feeling.
(warning: it never goes away)
Here’s what to do:
You’ve got nothing left to learn.
You’ve got plenty left you can change.