Last semester of my senior year of high school i had an extra class hour to fill and nothing required left to take.
I understand this situation is typical now, and that courses in bowling and french movies have become the hip choice for senior boys hoping to become men, but it was unusual then, or was to me.
I tried to think what i was good at.
Latin? No. Math? Yikes. Could sing, dance, act or play an instrument?
Nothing.
I wasn’t the type to take home economics (still ain’t) so I looked at my report cards for the last 3 years of high school to figure out what i was good at.
That’s when i noticed i got A’s in english.
From there an elective class in “creative writing” was an easy choice.
And, the first day, when i came in and discovered that in this class i was surrounded by all the beautiful girls in the senior class, i believe i took the first steps down the road that turned into the work i do. 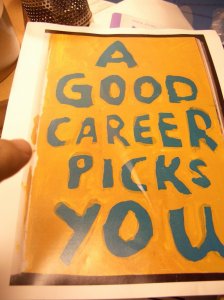 I wasn’t smart enough to know how to go about the job of finding a job for me.
I was lucky.
Heck, i didn’t even know that day in high school that what i was doing would decide what i would do.
It was an instinctual choice to go find those report cards and look at them.
It was not a considered thought to pick what class to take according to what i was good at.
It was the only thought i had.
But it’s a step i see some people who come to the school and who come to advertising, missing out on.
They make a choice to be in advertising for some other reason than that they’re good at it.
They want to go on tv commercial shoots in LA & drink martinis at the Mondrian.
They see a future full of first class travel, prada suits and coffee brought to their hotel rooms in silver service.

They like the idea of wearing jeans to work and taking three hour lunches at the best Polish restaurant in Detroit.(sorry, you’re stuck with my ideas about fun–that’s the place there on the right. it’s in hamtramack. click on the photo & you can read the address)
All excellent experiences.
But.
The thrill of them lasts only a few seconds while the hard work of being a copywriter or art director never goes away.
Any performer will tell you–and that’s what being an advertising creative is, it’s about performance according to schedule and there is no answer to when it’s done or good enough except for the one you give– the job is ever near. It never goes away. In the front of your mind at the office, in the back of your mind at the grocery store, the archery range or in bed.
Look at your grades.
Listen to what they say.
And not just the ones in school.
Look at what you do well.
Look for the calling.
That’s where the job you want is.
That’s where the job that wants you is.
(what does this long drag of a story mean in practical language to a student, you wonder? it’s only winter break, you’ve still got 5 months of school left if you’re 2nd year. This is all i ask: try some new things and see how you do. try the opposite of whatever you’ve been doing. If you can’t think of anything try asking people who know you what you’re good at. You won’t believe what they say, but they’re worth listening to. Mothers. You can trust mothers)