here is sinatra as an artist balancing between arrogance and humility.
he can feel the sure grasp he has of his audience’s heart–because it’s
his as well–but, at the same time, he must open his mouth and make
the air move to complete the equation, and that undone part–how small
it is for how large a part it plays–leaves him unsure.
i think the artist must be humble in order to keep his gift,
and arrogant in order to best use it.
is it any wonder all this creativity stuff is so hard to learn when
the lessons are made of such ephemeral hoo-rah as this?

this album is the place to start with sinatra. he was one of the prime inventors of the idea that a record album should have a concept to it that gave all the songs a reason to be there. it’s not hard to get that from one listen. there is more interesting sinatra to listen to. but only after you’ve dug this, the foundation. 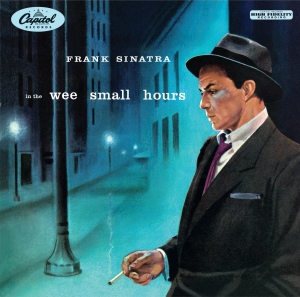 What sinatra did so well that artists–music, painting, advertising, writers, everyone–so much more often miss today is he didn’t whine. here’s a record he did after ava gardner broke his heart (his fault or hers is not the point, the pain is). he doesn’t blame, he doesn’t give in, he maintains distance from the actual sorrow. i hear pain but i don’t hear the infliction of that pain on himself. i think it elevates the accomplishment when a fantastically successful recording artist can find himself the equal of a man drunk on a barstool and speak for that man without embarassing either of them.

The Watertown album is the Sinatra people don’t talk about. If you don’t already have a feeling for the kinds of chances he was willing to take in his work you’ll listen to this album and say what the heck is going on here, this guy sucks. It’s not how i feel about it, but i can understand the sentiment. This is not the sinatra you’ll find on a jukebox. This isn’t what your parents danced to. This is a guy who was the Beatles of the 30’s and 40’s in his sixties wondering what else he could do with the album format.