The opening sentence of “Institutes of the Christian Religion” by John Calvin is not only something i believe is fundamental to living, but fundamental to becoming a high level advertising creative. 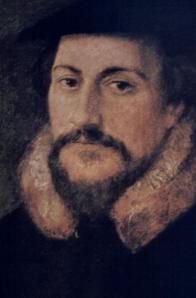 My thought, in reading Calvin’s gigantic declaration is that ads don’t exist in a compartmented world. They live–like all thoughts and speech and vision–in the midst of everything going on within earshot & eyeshot & thought-shot of the entire experience of the human being in the world. And so our preparation to create ads must be as wide as the world and at the same time as individual as each human.
Since an ad about golf doesn’t hit up against only people thinking about playing golf, the most important way to prepare to write an ad about golf may not be to become a golfer.
If everybody thinks all day long about everything, wouldn’t it be important to prepare to write an ad about golf (or cars or deodorant) by making sure you were open to everything including golf rather than closed off to everything but golf? To write advertising–maybe to write anything–you must be coming from where the audience comes from. Who doesn’t know the agony of having to listen to someone talk who thinks they’re more important than you are.
To attract hold and be loved by an audience you must be preoccupied with what preoccupies them.
What i think people think about is love God sex and death.
Also food and driving, but for limited times.
Which means–and yes i’m simplifying here–to become a better creator of ads you need to study not advertising, but man and God.
(of course there isn’t much in life that’s a better study of God and man than the way i play golf, but that’s my swing problem, hopefully not yours)

That’s my thinking. What’s yours? Comments, including simply badmouthing me, are invited.